In Zion National Park, there is a huge variety of wildlife to see. Whether visitors are in the canyons, walking the trails, or enjoying a picnic lunch at an overlook, there’s a good chance that they will run into at least one of Zion’s wild animals. The animals they see will fall into the category of mammal, bird, or reptile and amphibian. Every animal from these diverse groups has its own special characteristics which set it apart from the others and make it a joy to see in its natural habitat. No matter which types of wildlife visitors see in Zion, it will be an experience they never forget.

There are many different types of mammals that call Zion National Park home. These animals may live in the trees, on the cliff sides, or in the canyons. Some are cute, some are dangerous, but all are magnificent in their own way. The following animals are some of the most commonly seen in Zion National Park.

Perhaps the most visible mammal in the park, Desert Bighorn sheep, were reintroduced into the park in 1978. The reintroduction did not seem to be working in the early years as 14 sheep were brought in. Today there is thought to be over 450 sheep living and thriving in Zion. You can most likely catch a glimpse of them between the east entrance and the Zion Mt-Carmel tunnel

Known by many names, such as a cougar, puma, or panther, the mountain lion is one of the largest species of animals to call Zion home. They usually live in higher elevation in the Zion backcountry, but they travel across the landscape in search of food. Mountain lions take down large mule deer and bighorn sheep, which means they can easily injure a human if provoked. It is best to keep a safe distance and park rangers ask that all sightings of mountain lions are promptly reported. These large, fawn-colored deer are unique from the other types of deer across the country. Mule deer have a large pair of ears, which set them apart from other deer and helps them to stay cool during the hot summer days in Zion. The males sport large antlers on their heads which they use to fight other mule deer for dominance and mating rights. They can be seen throughout the park while grazing in grassy fields, especially during the cooler hours of the day.

This fluffy relative of the raccoon can be found all over the park, but they are rarely seen. Ringtail cats are sneaky and nocturnal, so they only emerge once the sun has gone down. Visitors who are out after dark may see their two glowing eyes as they dart away in fear or may catch their fluffy, striped tail as they run behind a rock.

People have been amazed and enamored by birds since the beginning of time. Their ability to soar through the clouds, swoop at dizzying speeds, and build their homes using what the land provides them truly is captivating. While birds can be found everywhere in the world, Zion is home to some of the most impressive and unique species of birds. Guests who come to Zion to birdwatch, and those who just happen to encounter birds during their daily travels, will never forget the magical experience the birds of Zion have given them.

This magnificent bird can be identified by its tan, speckled underside and its dark wings. It is the fastest bird in the world, reaching speeds of up to 200 miles per hour as it swoops to catch its prey. Peregrine falcons can be seen swooping high overhead throughout Zion. Since they nest high on the cliff sides, most visitors will not catch a glimpse of them while they rest, but they are just as fascinating to see while they are on the move.

The California condor became extinct in the wild in 1987. They species was teetering on the edge of extinction until a captive breeding program was started to protect them and encourage populations in the wild. The species has since been reintroduced to northern Arizona and southern California.

The California condor is a very large bird, weighing up to 20 pounds and with a wingspan of up to nine feet. They are regularly seen near Angels Landing and Lava Point. They are naturally attracted to human activity, but visitors are reminded not to approach any wildlife and to report California condors that are approaching humans.

This threatened species has found a sanctuary in Zion. They thrive in the deep, cool, narrow slot canyons that have been carved through Zion over millions of years. The mottled brown and white feathers of a grown Mexican spotted owl allows it to camouflage itself in the forests and rocks of Zion. They emerge at night to hunt for small rodents, which makes them less likely to be seen, but some lucky guests may get a glimpse of a Mexican spotted owl during a trip to Zion.

They slither, they crawl, and they hop out of sight; reptiles and amphibians are some of the least considered, but most amazing, species that live in Zion National Park. Many reptiles thrive in hot, dry temperatures while amphibians prefer cool, moist, and dark places, which means that the varying landscape in Zion makes the perfect home for both types of animals. Guests who hike across the red rock or explore the slot canyons are likely to encounter some of the following reptiles and amphibians.

The western rattlesnake is the only known venomous snake in Zion. It ranges in color from brown to gray and has hexagonal patterns running down its back. The first sign many people have that they have encountered this snake is its distinct rattling sound made by its tail. These snakes may be seen sunbathing on the red rocks or stalking prey across the landscape. If seen, it is best to give these snakes plenty of space to avoid making them feel threatened.

This reptile has a look just as unique as its name. The common chuckwalla is a type of large lizard that lives along the rocks of Zion. They can grow up to eight inches and have flat bodies with skin folds on their neck and sides. They prey on small bugs and can be seen scurrying across the grounds or up large rocks.

Seeing a desert tortoise while in Zion is a real treat. There is something special about an animal that moves so slowly but is still able to live for an incredibly long time. While sightings aren’t common, visitors may see a desert tortoise making its way across the desert at any time of day. They can be identified by their large, domed shell with deep and distinct growth lines. Other Reptiles and Amphibians

How to Safely Observe Zion Wildlife

To protect the safety of guests and Zion wildlife, it is important to follow a few rules when visiting the park. Guests who do not follow these rules run the risk of injuring themselves or the wild animals that so many people try so hard to protect. If caught interacting with wildlife, visitors may be asked to leave the park, or worse, could be fined or criminally charged depending on the seriousness of their interference. The following rules are easy to adhere to and will help ensure that animals and visitors will be safe and happy in Zion.

There is an old saying that states, “a cornered cat becomes as fierce as a lion.” This is true for most animals, not just cats. Whenever an animal is not given the proper space in its natural habitat, it will go to extreme measures to protect itself, its home, and any offspring it may be caring for. Even the smallest, cutest animals can turn into violent creatures. To make sure wildlife stays comfortable and guests stay safe, it is important to leave plenty of room for animals. When taking a picture, use the zoom setting rather than impeding on the animal’s space, and always back away slowly to avoid startling the animal.

Though it may be cute to see a squirrel running around with a sandwich crust or birds fighting over cookie crumbs, feeding wildlife can be detrimental to every animal species and their environment. Wild animals are used to eating what nature provides, so when humans start feeding them, they lose the instinct that tells them to fear humans as well as their instinct to find their own food. This leaves them reliant on people for survival and provides them with food that is not healthy for them. Rather than feeding wildlife, it is best to observe animals in their natural habitat and watch them forage for food that is provided for them by the land.

Though it’s rare to encounter a bear, mountain lion, venomous snake, or other dangerous creatures, there is always a possibility that an encounter could happen. When this happens, visitors should contact park officials to let them know what animal they saw and where they saw it. This allows rangers to keep track of dangerous species, make sure they are not moving into populated areas, and keep visitors and the animals safe. 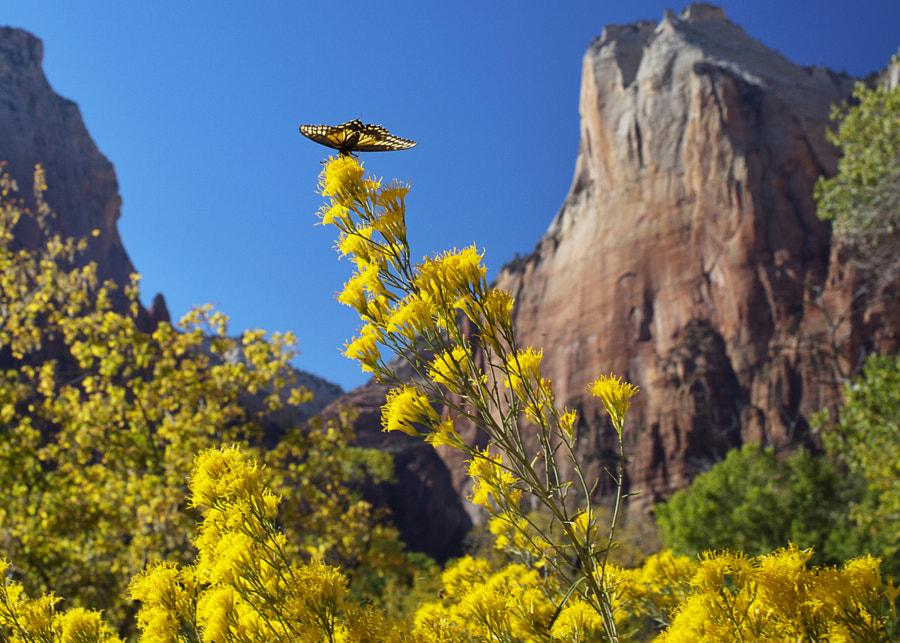 See the Untamed Wilderness of Zion

Many people explore the outdoors just to get a chance to see the many diverse creatures that live along the landscape. However, even those who are out to hike, climb, or bike across the countryside may be lucky enough to encounter one, or many, different animals during their journeys. Keeping an eye out for the incredible mammals, birds, reptiles, and amphibians that call Zion National Park home will make a trip to the park even more interesting and exciting.
January 12, 2018/0 Comments/by Zion Bumbleberry Hotel
https://www.bumbleberry.com/wp-content/uploads/2018/05/8071492798_589c740d10_o.jpg 640 960 Zion Bumbleberry Hotel https://bumbleberry.com/wp-content/uploads/2016/03/BumbleberryInn-Logo-shrink-2.png Zion Bumbleberry Hotel2018-01-12 21:02:542019-10-23 18:17:49Wildlife in Zion